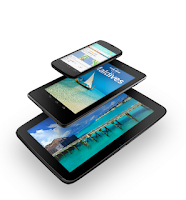 Google canceled the Android event today due to the hurricane, but the expected products were still announced. Take a gander.

A new phone, the Nexus 7 was announced. The specs are below, with comparison to the previous Nexus and the recently announced iPhone 5. Most interestingly, it will support wireless charging.

An incremental version update to Android, still called Jelly Bean, accompanies the devices. As expected, it will support multiple users (on tablets). This could be an important feature for shared tablets.

Android 4.2 comes with an update to Google Now which adds flight information, restaurant and hotel reservations, and shipping details.

Android has had panoramic photos for some time, but now that Apple has it, I guess it's time for something new. This new feature produces StreetView-inspired 360-degree immersive experiences, shareable on Google+ and Google Maps. This is potentially interesting.

The announcement included unexpected updates to the Google Music service. First, they will have a matching service. Apple was first with iTunes Match, and then Amazon with their Cloud match (both $25/year), and now Google comes along with their matching service (free). The benefit is that music files can be matched against the content library and users can access music they legally own without having to upload it all. For people with large mp3 libraries, this is a much quicker way to get started with online music. The matching service will come to Europe first on November 13. Google also announced a partnership with Warner Music Group, the major label holding out from listing on Google Music.

Bing is aggressively advertising their Bing It On challenge, the "Side-By-Side Search Off." So what do you get if you search for "side by side search off"? Here's Google. Here's Bing.

Google has Bing's challenge page as the first link. Bing doesn't even have it on the first page! Challenge lost.
Posted by Jeff Garrett Posted at 12:04 PM