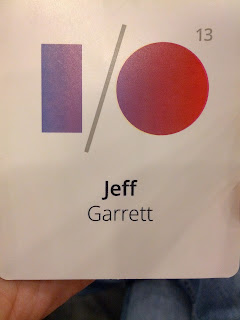 Google I/O is over, and it was awesome! I've been too busy to summarize it, so I'll post in chunks. This is the first part. A lot of this has already been covered in the tech media, but this is my take.

Android: The rumored Android 4.3 was nowhere to be seen! Although we can infer some of the improvements scheduled for 4.3, this was a deliberate omission. It was Google's way of saying they don't need a new Android version to deliver improvements and new APIs. Considering the constant talk of fragmentation and handset makers struggling to keep up with upgrades, this is an interesting shift in policy.

Instead, the majority of platform updates were bundled into a library, Google Play Services, which is available on Android devices back to Android 2.2 and which auto-updates just like the Play Store. The functionality in Play Services includes a battery-friendly location provider, geofencing, activity recognition, cross-device notification syncing, Google+ cross-platform single sign-on, the Maps API, Cloud Messaging, and multiplayer gaming functionality.

The gaming functionality will also be available on iOS.
Posted by Jeff Garrett Posted at 7:53 PM